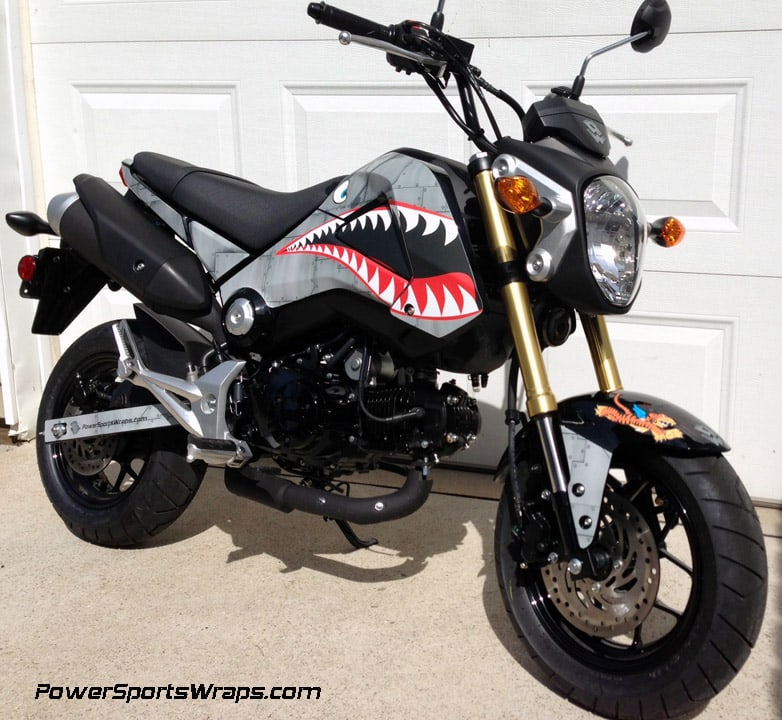 Powersportswraps.com is excited to show you one of our all-new 2014 Honda Grom MSX 125 Graphics Kits. The Dirty Air Craft Metal P40 Shark Face Grom decal kit (pictured) consists of more than 17 pre-cut decals precision fit for the Grom body panels. These easy-to-apply graphics are produced on the air-release wrapping film with cast sheet laminate to protect the image surface from scratches, scuffs & UV rays. This means that your graphic image is a sub surface image that is protected under the laminate for years of durability. With the re-positional Grom graphic film, installing this custom Honda MSX 125 decal kit is a breeze. Just peel and stick it to apply!  Not sure how to apply our graphics?  Watch our Grom Graphics kit installation video here.

If you have a decal kit idea be sure to send us your concept so we can provide an estimate to custom create your own personal decal kit. 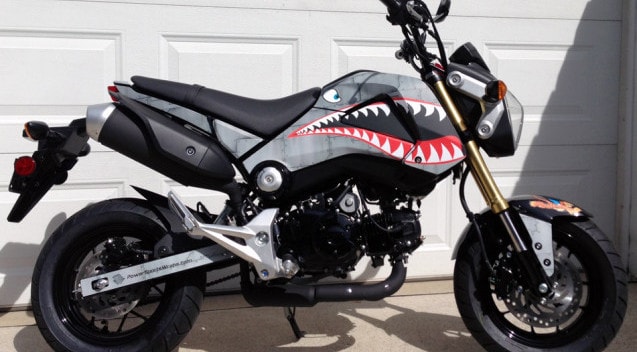 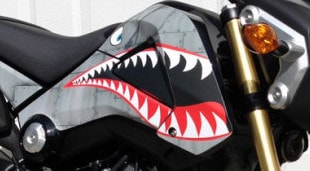 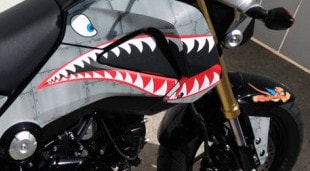 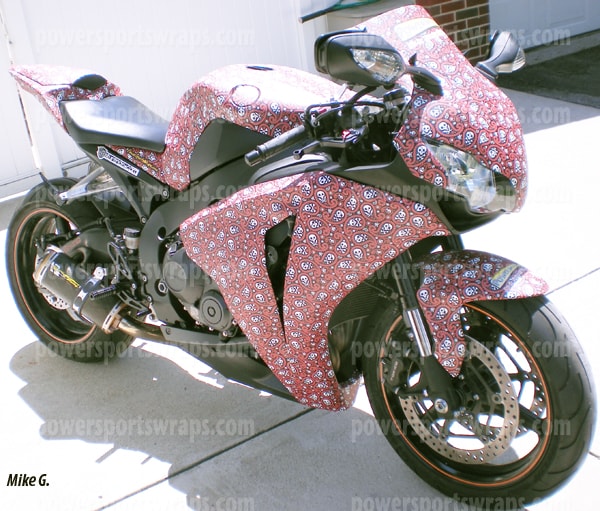 We finished this CBR 1000 bike wrap just in time for Erie PA’s Roar on the Shore bike rally.

This is our Smitty Orange Skulls wrap pattern in Matte finish.  Shop our HUGE store for the larges selection

of sport bike wraps.  All of our vinyl wraps have rolled on sheet laminate for added protection.

If you have a bike wrap project contact us … we can help. 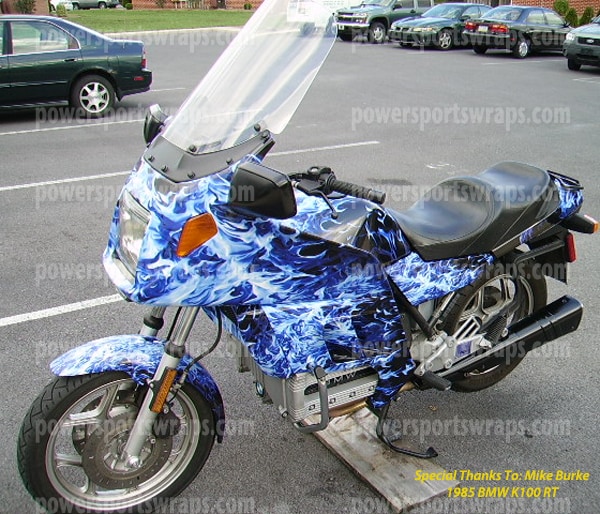 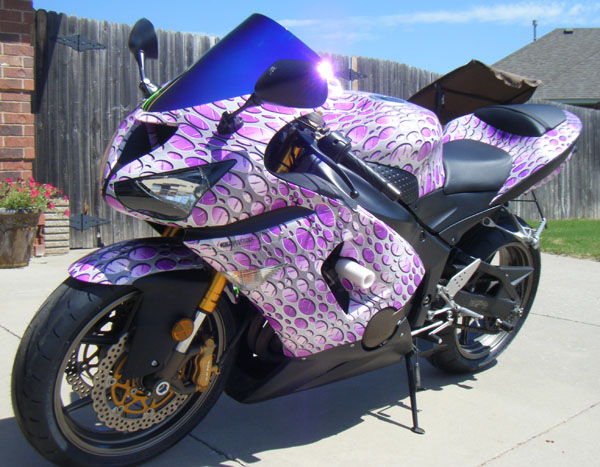 Sport Bike wraps can really make the difference in making your bike stand out from the crowd.  Imagine pulling in the next bike night on something like this.  If you are looking for an inexpensive way to stand out from the crowd we have the product  & the look that you want.  This bike is owned by Amy Wright & she wanted to make her ZX6 look like no other…. how do you think she did?? An Amazing look with our Punch Metal Plate Purple wrap and it only cost her $325.00 to make her bike look like this, 5 sheets is all you need.  If you want to customize your sport bike contact us today…

Check out this super cool looking Suzuki Intruder 1400 motorcycle wrap with our custom created Blue-Black flame wrap (FLM-100-BFM) on it.  We created this look for our customer Tim Crosby who wanted to make his Intruder stand out from the crowd without costing him a bunch of money.  With a bit of measuring and discussion we created a special tank wrap to fit his tank, we even cut it to shape for Tim to make the application even easier for him.  We also produced the fender wraps & side covers… so that Tim could apply the film him self & save $$.   just look what you can do to your cruiser for around $200.00. DO IT YOURSELF  &  SAVE ..  If you have a bike & would like to make it STAND OUT from all the others then contact us.  We will provide you with everything you need to do the application yourself.   Why Paint?? When You Can Wrap… 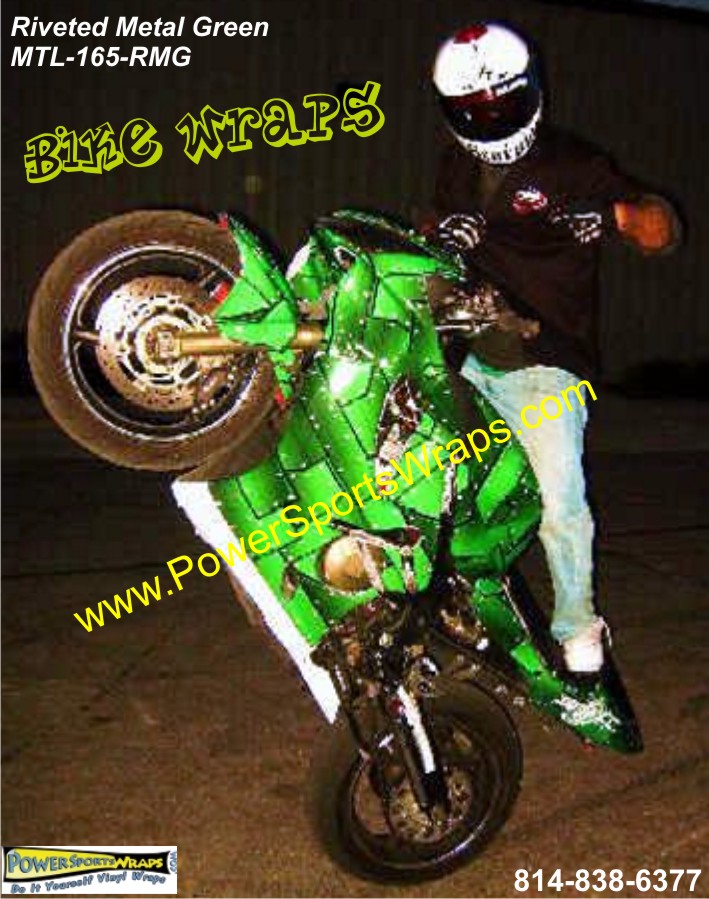 Special thanks to the amazing talents of Kyle Sliger stunt rider for Wheele industries out of Fort wayne IN.

Kyle had this to say: I love the wrap. It turned out great.  And it was simple and you guys are reliable.  Had no worries  Ill be sure to call you guys for any other needs of business in the future .

Stunt bike wraps from PowerSportsWraps.com… Riveted Metal Green . Wrap a complete Sport Bike for $325.00 save $$ do it your self vinyl wraps.  We provide you with all you need for a successful wrap application. Over 200 patterns now available.  Custom Sport Bike wraps are inexpensive when compared to custom air brush. You can apply the wraps yourself with our do it yourself wrap application videos. Don’t pay to have this applied do it yourself. 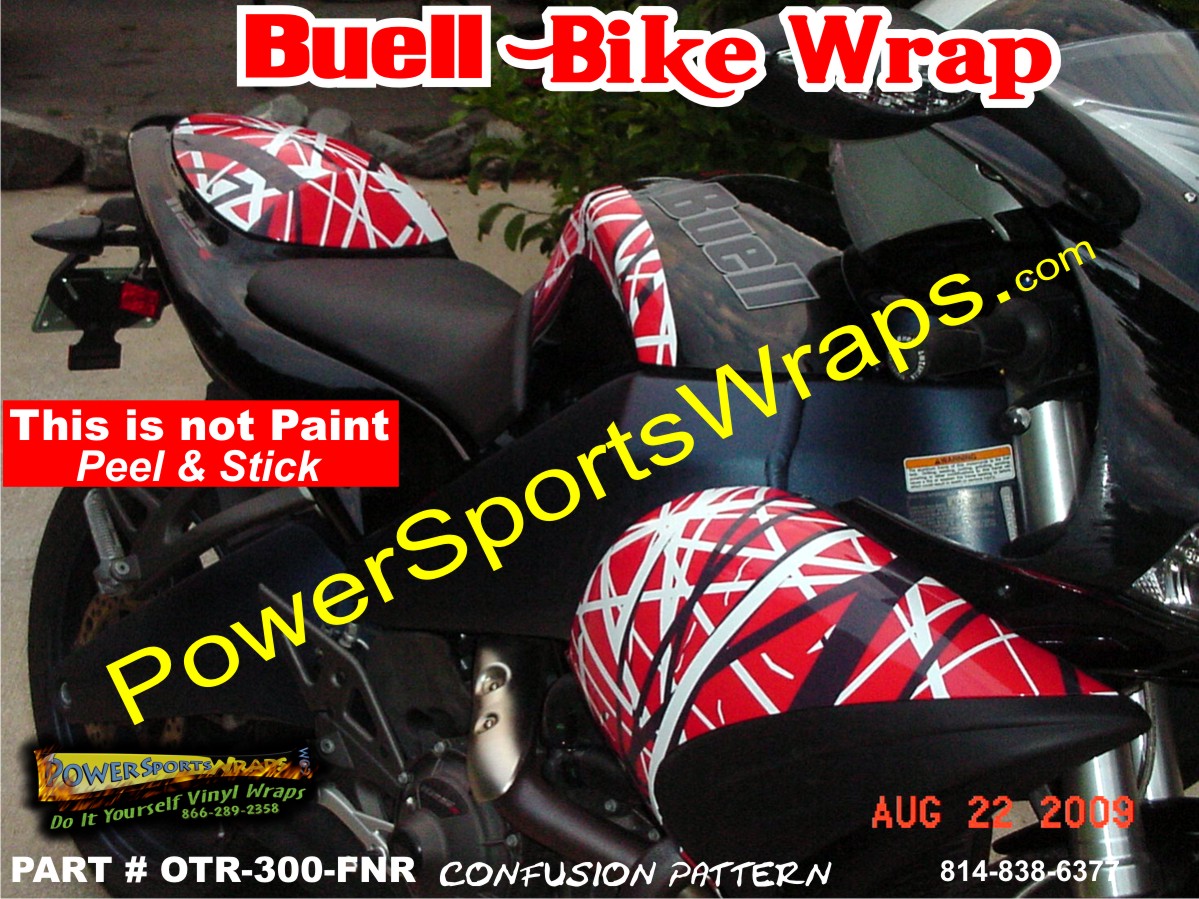 If you have a Buell & are looking to dress it up, this is the way to go.  We have over 200 vinyl bike wrap patterns to choose from starting at $65.00.  This is a great product for Race Teams or Track Bikes or the everyday user who just wants to change up the look of his Buell or any motorcycle for that matter.

Our customer Jim purchased the Red Confusion pattern and applied it on his Buell 1125R as a way to make his bike stand out from the others.  Jim was very pleased with the way the bike turned out.

Make your bike stand out on your next street ride by applying one of our bike wraps.

You can cover a sport bike for only $325.00 Call us today to order your Buell bike wrap.