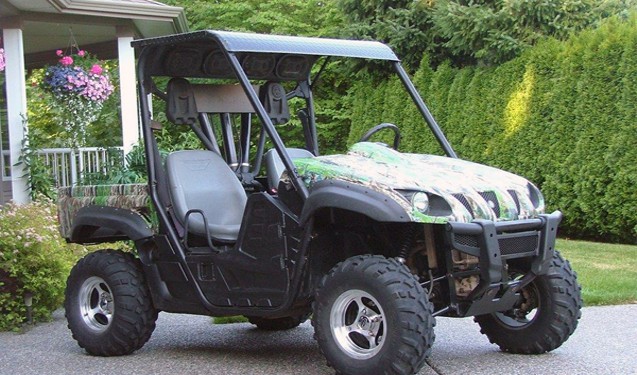 The Powersportswraps’ Heavy Timber HD camouflage vinyl film applied on this YAMAHA Rhino side by side is a great way to dress this (or any) machine up.  The easy apply peel and stick camo film can set your machine a part from all the others. With a little time and effort you can take a machine that is looking run down and make it the next head turner.  If your UTV panels are showing wear or have lots of scratches then you need some of our vinyl wraps.

Shop our huge camouflage online store to select a pattern that fits the look you want. Flames, Metal Effects, Skulls, Camo and much more. 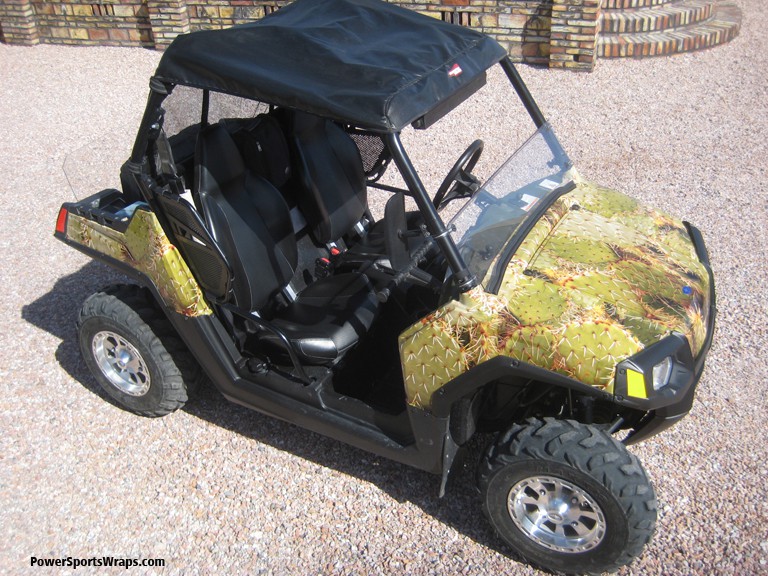 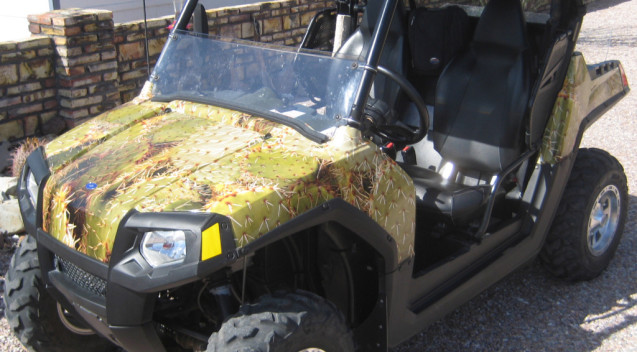 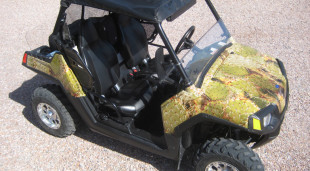 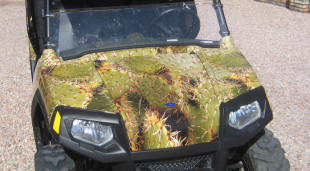 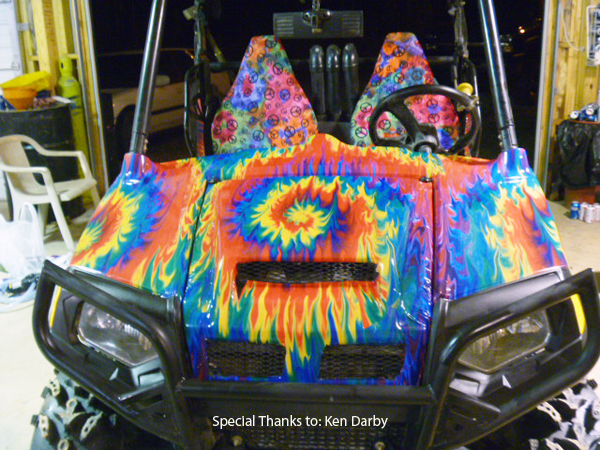 Check out this custom Tie Dye Flame side x side wrap on Ken D’s Polaris RZR.. Ken wanted a super cool custom RZR and could not wait to get his RZR

wrapped in this pattern. Ken used 5 of our 2’x4′ sheets for his project.  This pattern was custom designed originally for Rupert from  the TV show Survivor.  We have hundreds of vinyl wraps for you to choose from.  Shop our huge online vinyl wrap store to see all our patterns.

Ken said:There were people coming over to where we were camped and taking pictures of it. I wrote your website down a couple times and told people about it when ever they asked.  We used five sheets to do it. I think if I was to do it over, it would be twice as good of a job just because of the learning curve to applying it. It takes some getting used to knowing how aggressive you can and can’t be with it.

I love it!  Ken Darby 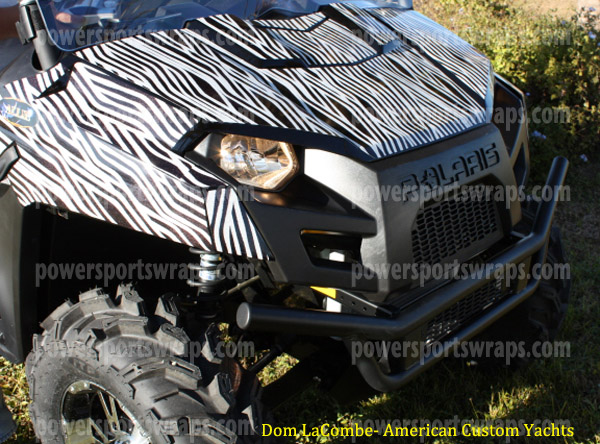 Special thanks to Dom LaCombe for sending us his Polaris Ranger photos. Dom applied our Zebra pattern vinyl wrap in his Polaris side by side.

Dom was is a first time user of our products & I have to say he did an amazing job with his vinyl wrap application.  We have a large selection of animal skinz to choose from when it comes to side by side decals, wraps &  graphics.   If you are looking for Camo film we have over 25 patterns to choose from including: Mossy Oak, Real Tree & Advantage camo film.  Camo’s not your thing, see our huge selection of metal, carbon fiber, lightning, flames & more.. 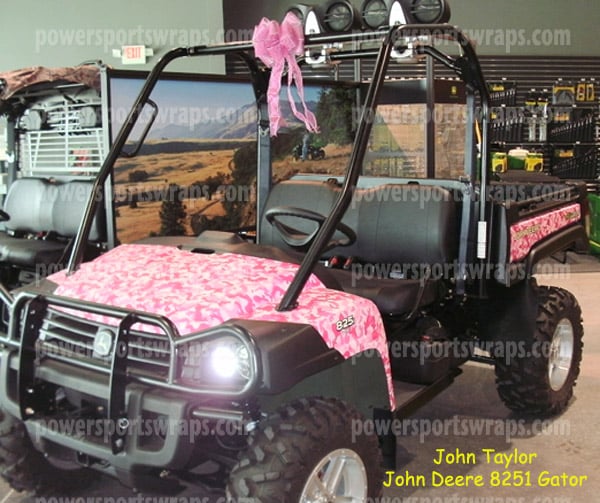 Special thanks to John Taylor for sending us his photos of a John Deere Gator 825i with our Pink Micro Camo film applied.  John used 6 sheets of our Micro Pink camouflage film to cover this Gator.  Wow talk about a change from the normal looking side X side the Pink camo film looks great!!  Most Side X Side utility vehicles will use from 5 – 7 sheets or around 60 Sq foot of film.  If you have a side by side & would like to wrap it feel free to contact us with any questions. 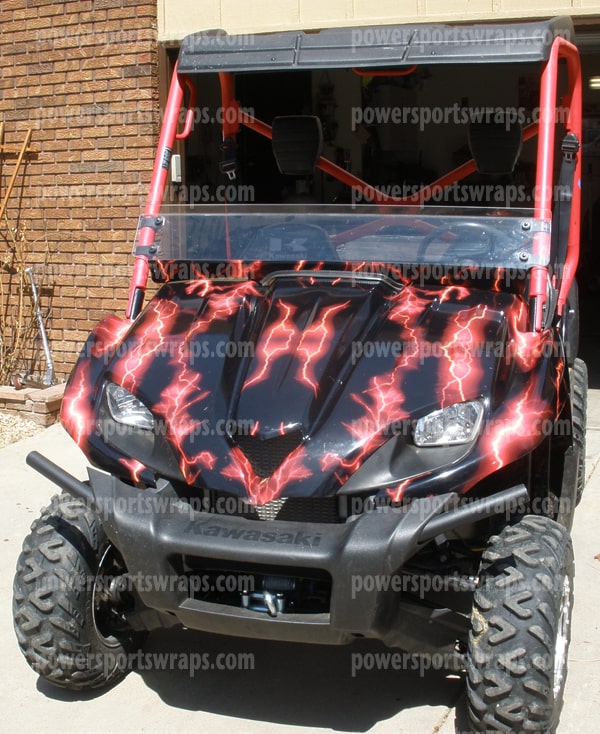 Special thanks to Scott Stetson for sending us these photos of his Kawasaki 750 Teryx with our Lightning Red vinyl wrap sheets applied on it.  We custom produced the front hood sheet for Scott so he could get the look he wanted for his Teryx wrap. This Side X Side vinyl wrap project normally would use around 6-8 sheets of material.   This Side X Side wrap is just one example of what you can apply our custom vinyl wrap sheets on.  Just peel & stick this user friendly vinyl wrap to just about any ATV, Side by Side, Jet Ski, Motorcycle, Snowmobile, Go Kart, or any other powersports equipment. We provide you with everything you need to have a successful application & just like Scott you too can be sporting some of the most amazing digitally produced wraps on the planet.. Contact us today to get your Side by Side wrap today… Or shop our huge Vinyl wrap store. 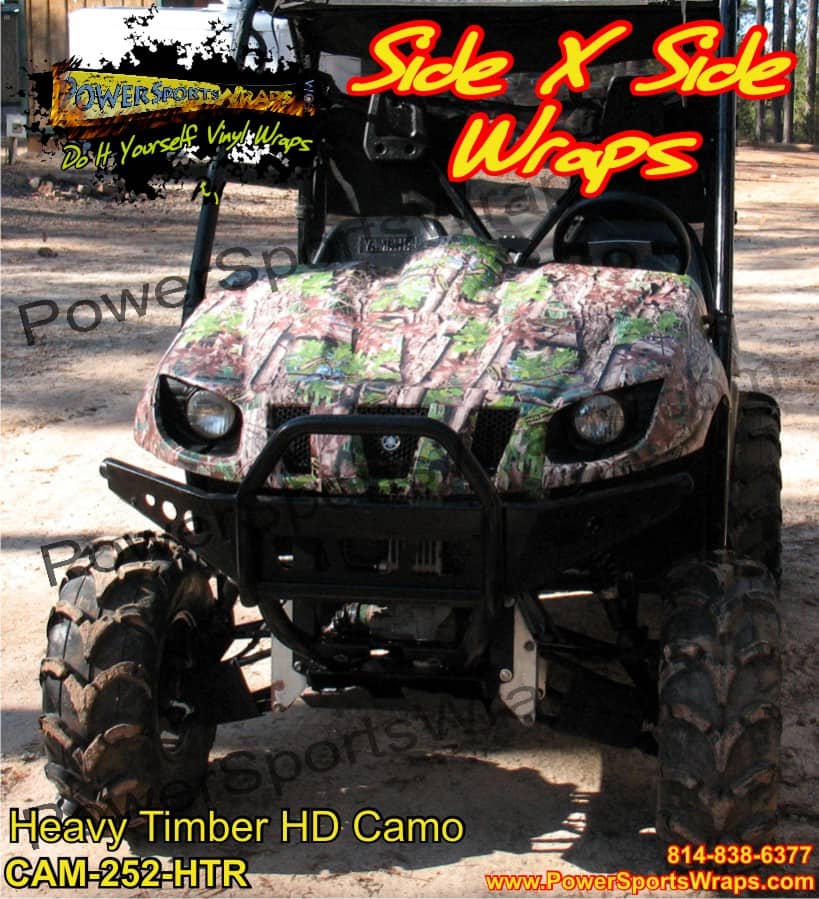 Check out this full camo Yamaha Rhino Side X Side, UTV wrap.

This high definition Camouflage vinyl is called “Heavy Timber” It’s a great woods wrap for all types of hunting applications.  If you have and ATV, Side X Side, Dirt Bike, Golf Cart or any other power sports machine that you would like to apply camo film to just give us a call… we can help with all of your camouflage needs.  We have over 200  do it yourself vinyl wraps online ready for sale. Choose from Flames, Skulls, Camo, Metal, Carbon fiber, Checker pattern wraps & much more..in vinyl wraps